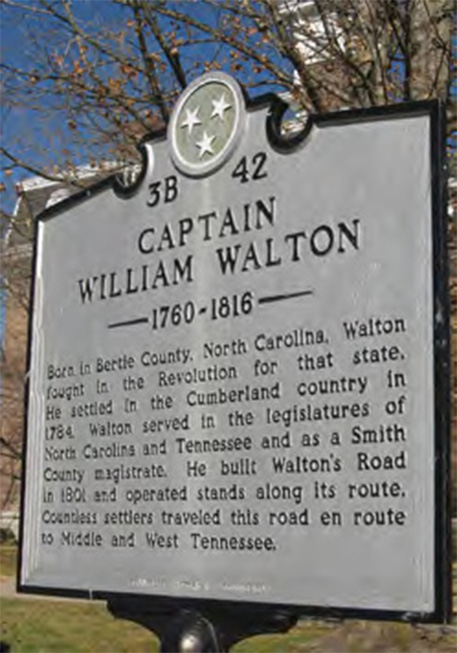 Captain William Walton Settlement
The Walton Road was one of the principal roads connecting Knoxville and Nashville in the late 18th and 19th centuries. Completed in 1801 and officially designated as the Cumberland Turnpike, it became commonly known as the Walton Road in honor of its primary builder, Captain William Walton of Carthage. Upon its completion, the Walton Road served as the primary migratory route of settlers who traveled from East Tennessee to the settlements along the Cumberland River.

Captain William Walton was a native of Bernie County, North Carolina, who immigrated to present-day Tennessee in 1785 following service in the Revolutionary War. He and his family arrived via the Cumberland Gap, where Tennessee, Virginia, and Kentucky meet, and arrived in Tennessee through Kentucky. It was a circuitous route from North Carolina. Several such paths to the Cumberland settlements existed by 1780.

These early paths were used by Native Americans, but were originally the migratory routes carved out by grazing herds such as bison. In their movement, the animals sought the path of least resistance across the rugged terrain. Therefore, their traces became logical foundations for road-building projects.

As an early pioneer to Middle Tennessee, Walton experienced the difficulties of passage through dense woodland inhabited by Native tribes and wild animals. From the experience, he determined to alleviate the arduous challenge of settlement by building a wagon trail for future pioneers. The Walton Road, though not the first east-west route to the area, was completed at a time of heavy migration and thus was extremely important in the settlement of the Cumberland Plateau and Middle Tennessee.

Leaders in the Cumberland Settlements, Anthony Bledsoe, James Robertson and James Donelson, had petitioned the General Assembly of North Carolina for the building of a direct road between East and Middle Tennessee. In the November Session of 1787, the Assembly issued the following:

An Act to Effect the Cutting and Clearing a Road from the Lower End of Clinch Mountain to the Cumberland Settlements, and for Preserving and Granting Safety to the Inhabitants Thereof I. Be it Enacted by the General Assembly of the State of North Carolina, and it is hereby Enacted by the authority of the same, That it shall and may be lawful for the commanding officers [of Sumner and Davidson Cos. Militia] to appoint two or more persons to examine, survey and mark out the best and most convenient way from the lower end of Clinch Mountain to the settlements of Cumberland as aforesaid; and the said commanding officers are hereby vested with full power and authority to order out the militia of the counties of Davidson and Sumner, to cut and clear the road so marked as aforesaid, under the direction of themselves or either of them, or any of the field officers by them appointed to superintend the same.

The road was to connect Fort Southwest Point on the Clinch River in present-day Kingston to present-day Davidson County. Militiamen who toiled on the road’s construction received land grants for their service. Just as divergent paths existed from Kentucky into Middle Tennessee, so were a variety of roads built to connect the Cumberland settlements with East Tennessee. Various roads were known by different names, as these pioneer trails became incorporated and overlapped with one another in some sections.

The Walton Road was also known as the Cumberland Road and these two designations have led to some confusion among historians. Similarly, to the northeast of Fort Southwest Point, another early pioneer road was known as the Emory (also spelled Emery) Road. It followed an Indian trace known as Tollunteeskee’s Trail. Emory Road left present-day Grainger County, traversing Knox County to cross the Clinch River at Lea’s Ford, and continued through present-day Oak Ridge, Winter’s Gap (Oliver Springs), present-day Wartburg and Lansing, and on to Standing Stone (Monterey). The Emory Road was commissioned by the Continental Congress and was completed in 1788.

The Emory Road was also varyingly known as the Avery Trace and the Old North Carolina Road. The identification of the Emory Road as the Avery Trace in particular is widely disputed by historians. Supposedly named for early pioneer Peter Avery, his name was never mentioned by the North Carolina legislature as having anything to do with any road. The legend of Avery’s Trace likely came from stories of an early historian Captain William McElwee of Roane County, Tennessee. His anecdotal histories, while interesting and entertaining lacked any documentation. The author, Harriette Simpson Arnow, in her definitive works Seedtime on the Cumberland and Flowering of the Cumberland never

mentioned the word “Avery.’ The different names for these roads have resulted in inconsistent maps and labeling by present-day historians.

In 1799, when William Walton commenced to build a road from the confluence of the Cumberland and Caney Fork Rivers to Southwest Point (present-day Kingston), he similarly incorporated some portions of older roads, including parts of Tollunteeskee’s Trail and the Holston Road. As a prominent resident of newly-established Smith County, Walton requested permission from Territorial Governor William Blount to construct a road from the forks of the Caney River eastward through Pekin, White Plains, Crab Orchard and Kimbrough, at the foot of Roane Mountain.

Stump-free and fifteen feet wide, Walton Road was the early-nineteenth-century antecedent of modern U.S. 70, which closely follows the historic road’s path from the Cumberland River eastward. Bridges or fords were built at streams, and tollgates were constructed at designated points along the route. When it was completed, a traveler in 1802 described the road as “broad and commodious as those in the environs of Philadelphia.” The road was marked every three miles with mileage markers and stands (inns) were built a day’s journey apart to provide lodging and dining.

Many remnants of the historic road are visible to drivers along U.S. 70. Walton Road left Carthage in Smith County heading eastward to Elmwood, established in 1828. From there it rose to Chestnut Mound a

nd then ran north of Baxter through Blackburn Springs (Double Springs) and north of Cookeville in Putnam County. The historic road paralleled present-day Hwy. 70 in the western part of Putnam County and the railroad in the eastern part of the county.

East of Cookeville, the historic road passed through an important stand in White Plains before rising to Monterey on the Cumberland Plateau. This 900’ ascent (or descent) was exhausting for travelers and their animals. East of Monterey, much of the historic roadbed lies beneath the modern highway as it passes into Cumberland County. East of Mayland was another important stop along Walton Road known as Johnson’s Stand. It was about here that the historic road continued east across the Obed River, where a stone bridge crossing is visible on the river bottom. At the river was Graham Stand, which accommodated travelers when the river flooded its banks and could not be safely crossed. Walton Road continued east past Crossville and into Crab Orchard. Another steep ascent/descent occurred east of Crab Orchard at Spencer’s Mountain before the road passed by waterfalls at Ozone. Walton Road (and also U.S. 70) passed through Walden’s Ridge through Kimbrough Gap to present-day Rockwood in Roane County. Here Walton Road incorporates previous pioneer roads, the Avery Trace and Emery Road.

Walton Road influenced the transportation routes into the late-nineteenth and early-twentieth centuries. The Tennessee Central Railroad built in 1890, followed Walton Road. The Tennessee Central was smaller than its competitor, the Louisville & Nashville (L&N), and provided an important conduit between the Upper Cumberland region and both Nashville and Knoxville. Remnants of the abandoned railroad bed still identify the original Walton Road, especially in Cumberland County. In western Putnam and eastern Smith Counties, traces of Walton Road can be identified as depressions next to the railroad. Following World War II, Eisenhower’s Interstate system logically followed previous infrastructure efforts, and U.S. 70, and by extension Walton Road, influenced the path of Interstate 40 through Middle and East Tennessee.

Several historical markers identify remnants of historic trails in Middle Tennessee. The Old Walton Road Chapter of the DAR dedicated markers in 1936 in Putnam County. The first was on U.S. 70 east of Cookeville, noting the accomplishments of early settler William Quarles. His White Plains plantation was at an important crossroads. The second marker was west of Cookeville, also marking Walton Road.

The social structure of settlements along the Walton Road were somewhat different than other parts of the Cumberland Plateau. As noted in Webb (1960), communities often evolved with the betterment of roads and connections. In the central region of the Cumberland Plateau, communities were built on uplands, rather than on the valley bottoms as was often done where the valleys were broader and flatter. Rural “neighborhoods” evolved from a collection of homesteads along a portion of the road. Churches or schools were built and shared among the “neighborhoods.”